We would like to thank everyone who attended the Municipal Panel event. We sincerely hope that you found it valuable.

As mentioned in the presentation, here is some additional material for you to download and review at your leisure:

Marketing Associates of Spokane is pleased to host a Municipal Panel with our local Cities and County.  Don’t miss out on this exciting opportunity to hear from these local panelists, who will discuss:

The panelists for this exciting program include:

Todd Mielke, County Commissioner – District 1: Todd has earned a reputation as a hard-working, common sense person with an ability to bring people together to solve problems.  He is a staunch fiscal conservative, a champion of small business, and a pragmatic leader.  Not only does he have experience as a local business owner, Todd also has an extensive background in government.  He worked for four years as staff in the Washington State Senate, and was elected to the House of Representatives where he served for five years.  While in the House, Todd took the lead on welfare reform, placing limits on the growth of government, sponsoring health care reform, and negotiating the largest tax reduction in Washington’s history.  Todd’s work in the legislature earned him a number of awards, but most noteworthy was being named a “National Legislator of the Year,” the only Washington legislator to ever receive the honor.

Today, Todd is one of the three Spokane County Commissioners.  Elected in 2004, Todd has already focused on improving the day-to-day services provided by the County and building relationships with elected officials in other jurisdictions. He serves on the Convention and Visitors Bureau and is the Chair of the Washington State Association of Counties Legislative Committee.  Todd is the proud father of his 23-year old daughter, Ciara.  He has been involved in a number of community organizations, including the Vanessa Behan Crisis Nursery, Rotary, and the Duke’s Car Club.

David Moss, MSCE, PE – Utilities Engineering and Water Reclamation Manager: Dave has nearly 40 years’ experience in the Public Works field with a primary focus in water, namely drinking water, stormwater and wastewater. This work has involved many aspects of utilities engineering including planning, permitting, design, construction management, start-up and operations.  Dave has been with the Spokane County Utilities Division since 2006 as the Water Reclamation Manager, having direct responsibility for the largest public works project in County history: the $172 million Regional Water Reclamation Facility recently constructed at the former Stockyards site near the Freya Street Bridge.  Dave also oversees County Utilities staff as the Industrial Pretreatment Coordinator, and is the Engineering Manager for sanitary sewer design and construction.

Prior to joining Spokane County, Dave spent over 30 years with private consulting engineering firms in Seattle, Las Vegas, Portland and Spokane.  Dave is a native of Washington State, born and raised in Walla Walla.  He has a bachelors degree in Civil Engineering from Seattle University, and a masters degree in Civil and Water Resources Engineering from the University of Washington.  Dave is licensed as a Professional Engineer in WA, OR and ID.  He is also a Design Advisory Board member for Gonzaga University’s Center for Engineering Design & Entrepreneurship.

Kyle Twohig - Operations Manager, Engineering: Kyle has over 12 years experience in construction project management: These projects include commercial, residential, and municipal. Kyle's emphasis on keeping projects within scope, schedule, and budget, has allowed him the opportunity to deliver the City's last 3 years of Construction Season under budget.

Kyle graduated from Loyola Marymount University and holds an MBA from Gonzaga University. Kyle began his career with Parsons Evergreen working on Air Force Base entrances (inc. Fairchild), then moved to the Inland Group to work within both the construction and development side of apartment complex building and development. He is also a small business owner, and a volunteer board member for Evergreen Region Volleyball Association (ERVA).

He enjoys all outdoor activities including volleyball, paddle boarding, and skiing and spending time with his wife

Rustin Hall, AIA, Principal - ALSC Architects: With a strong commitment to exceptional client service, Rustin seeks progressive solutions to project planning, design and management issues. This has been demonstrated through his involvement with projects including the Central Spokane YMCA/YWCA, North Spokane YMCA/YWCA, six new aquatic facilities for the City of Spokane and the $80 million Martin Stadium Expansion and Cougar Football Complex at Washington State University.

An advocate for youth development, Rustin has coached youth sports, administered youth programs and is an award-winning Scout leader. He serves on the Capital Projects Advisory Review Board (CPARB) Project Review Committee (PRC) for the State of Washington, is Vice President for Membership on the Boy Scouts of America Executive Board, and a Board Member for the Greater Spokane Valley Chamber of Commerce Foundation.

Rustin earned his Bachelor of Architecture in 1984 and Bachelor of Science in Construction Management in 1985 from Washington State University. 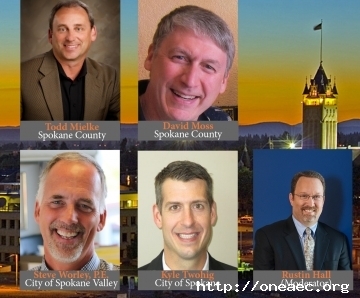